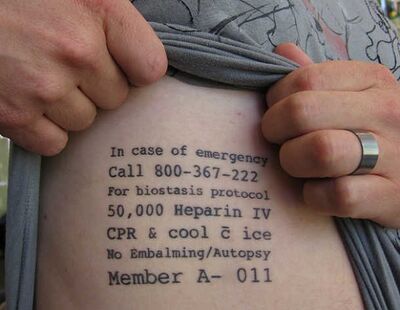 Cryonics is a controversial life extension technique that aims to preserve neural activity and life typically of a recently deceased person through use of preservation techniques and low temperatures so that resurrection may be possible in the future when technologies have improved.

That is not dead that can eternal lie,


and with strange aeons even death may die.

Margaret, Paul, I wish you the very best and it is my most fervent desire that we meet again, hopefully in a time and place where we can laugh and reminisce about the dark ages from which we were so lucky to have made our escape from...
- Mike Darwin

Cryonics is the preservation of dead persons at temperatures low enough to practically stop decomposition, with the intent of future revival. While there is experimental evidence attesting to the conservation of vitrified tissue and the possibilities of repair; the decision to undergo cryonic preservation after death is an act of faith, not of science.

The two main ideas behind cryonics are Information-Theoretic Death and the technology vitrification. The first idea is the idea that our criteria for death has changed as our technology and our understanding of biology has changed. In the 1800s, a person who drowned was considered dead. Information-theoretic death is the 'ultimate' death, the one that we know as fact is irreversible, and does not depend upon a changing understanding of nature. Information theoretic death is reached when the body (Especially the brain) has been damaged to the point that it is beyond repair; where repair means having enough structure and contextual information to bring the brain, along with the personality, memories and attitudes that it contains, back to a functioning state. If tissues have been properly preserved, this revival could be accomplished through a variety of ways, but even the best methods leave behind irreparable damage, which means memory loss and personality changes, and other neurological (Motor control) damage. The latter is sufficiently generic to be repaired when that kind of technology arrives, the former is unique to each person and impossible to recover.

The second idea, vitrification, is a process through which tissue is lowered to cryogenic temperatures without freezing or forming ice. The most widely believed myth about cryonics is that when people are frozen, ice inside their cells bursts and destroys tissue irreparably. This is false on two points: Modern cryonics uses cryoprotectants which prevent ice damage by vitrifying instead of freezing, and the water that forms ice is mostly outside the cells. A common argument against cryoprotectants is that they are toxic: While true, this only affects the prospects of suspended animation through vitrification, since cryonics patients would probably be revived through more complicated means than just thawing them and applying CPR once a cure for what killed them is found.

To whom it may concern,


Cryonics is a legitimate science-based endeavor that seeks to preserve human beings, especially the human brain, by the best technology available. Future technologies for resuscitation can be envisioned that involve molecular repair by nanomedicine, highly advanced computation, detailed control of cell growth, and tissue regeneration.


With a view toward these developments, there is a credible possibility that cryonics performed under the best conditions achievable today can preserve sufficient neurological information to permit eventual restoration of a person to full health.


The rights of people who choose cryonics are important, and should be respected.

Interestingly (and somewhat to the author’s surprise) there are no published technical articles on cryonics that claim it won’t work.
- Ralph Merkle

Most criticism of cryonics arises from fundamental misconceptions (For example, that cryonics involves freezing) and ignorance of current cryopreservation techniques and procedures.

The preservation of cells, tissues and organs by cryopreservation is a promising technology nowadays. However, the primary purpose of this science has been diverted to a doubtful technology, cryonics. Cryopreservation techniques are now being adapted with the aim of preserving people’s bodies after death in hope that in the future, medicine will be able to revive them. In this report we analyze both scientific and social issues involved with this technology. We first studied the events taking place in the cells during regular freezing. Various research experiments show that freezing causes damage to the cells. Therefore, vitrification presented by cryonics companies as an alternative, seems to be reasonable. We also looked at all the difficulties of this procedure and at the injuries that such a treatment could cause to the human body. Studies show that the vitrification procedure suppresses the injuries related to freezing but the use of cryoprotectants, although necessary, is toxic to the cells. Organs, such as kidneys, are the largest entities ever vitrified and thawed with success. By analyzing all present scientific data, we conclude that there is a limit to the size of living matter that can be cryonised effectively; therefore we conclude that it is not possible to cryonize an entire human body with the current technology without causing severe damage to it.

While definitely great progress from most cryonics 'criticism' to date, the paper seems to address the well-known fact that reanimation from cryopreservation is impossible (Or nearly so) due to the toxicity of cryoprotectant solutions. The most discussed methods of revival, Molecular Nanotechnology and Whole Brain Emulation are not discussed.

While it's sad that people focus on philosophical issues instead of the myriad technical and social problems that plague cryonics, along with its attachment to a history of failure and incompetence, philosophical concerns should still be addressed.

But what is relevant is not the definition of consciousness, but how this matters to personal identity. Again, here we have two opinions:

Under Definition 1, cryonics patients will be the same person (± brain damage). Under the second definition, when they are repaired, the patients are fundamentally different people who claim to be the same as the original and only shre personality and memories.