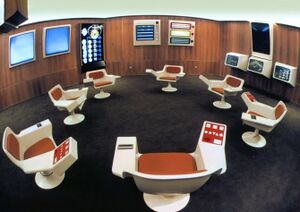 Project Cybersyn (English portmanteau of "cybernetic" and "synergy," Spanish name Cynco from "Sistema de INformación y COntrol") was an experimental decision support system built by the Allende administration of Chile from 1971-1973. The system was built on the premise of cybernetics, especially as conceptualized by Stafford Beer and Fernando Flores. The system was destroyed in the September 1973 military coup led by Augusto Pinochet.[1][2]

Information from individual factories, such as inventory and production output, was communicated by telex machine to a central control center, where it was entered into an IBM 360 computer[3] running the Cyberstride software for collation, error correction, and analysis. The results were then presented and discussed in a seven-seat control room equipped with slide projectors to review status information and graphs prepared by a supporting team of graphic designers.[4]