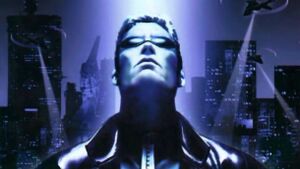 Deus Ex is a cyberpunk (and arguably proto-nanopunk) video game series set in a dystopian near-future from the mid-2020s through to the early-2070s. The world is governed by shadowy oligarchic organisations including the Illuminati, FEMA, Majestic 12 and the Knights Templar.

The augmentations available to the player is based on either cybernetics or nanotechnology, allowing the character to perform various features of strength, stealth and combat allowing creative approaches towards exploring the game.

One the major themes of the series of of the social and technological inequality of the dominant factions, leaving it up to the player which groups they ally themselves with or none.

Other themes include the role of AI in future science, with one of the multiple ending choices in both Deus Ex and Deus Ex: Invisible War allowing players the option to link with a near-omniscient AI with the aim of replacing the human shadow government with an AI-human hybrid technocracy.

The Omar, an explicitly posthumanist faction in Invisible War, further develops nano-augmentation in pursuit of both a hive mind and extreme environmental resilience. Their name, Russian for "lobster", references a concept in Bruce Sterling's Shaper/Mechanist universe: an externally synthetic but internally human entity, inverting the cyborg as externally human with synthetic internals.

Numerous overt and implicit references are made to political philosophy throughout the series.

The Morpheus AI in Deus Ex likens the social functions of surveillance with divine judgement, noting human desire to be seen and participate in larger groups.[2] This is extrapolated further in Invisible War, when JC Denton/Helios explains his plan for a just and desirable singleton world government, directly quoting Democracy in America by Alexis de Tocqueville and citing his conceptualization of an all-knowing "mind of God" as an ideal administrator, thoroughly knowledgeable of all circumstances and incapable of generalized approximations of justice.[3]

Publisher Square Enix uses the popularity of the franchise to communicate real transhumanist developments, and is even holding an event entitled "Human by Design" to showcase issues in even further depth. Square Enix have also partnered with Open Bionics to produce Adam Jensen inspired bionic prosthetics [4]

A short film, Deus Ex: The Eyeborg Documentary, was commissioned from Rob Spence by Square-Enix to explore real-world advances in prosthetics.[5]