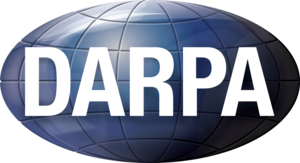 DARPA is the Defense Advanced Research Projects Agency of the United States Department of Defense.

"For sixty years, DARPA has held to a singular and enduring mission: to make pivotal investments in breakthrough technologies for national security. The genesis of that mission and of DARPA itself dates to the launch of Sputnik in 1957, and a commitment by the United States that, from that time forward, it would be the initiator and not the victim of strategic technological surprises. Working with innovators inside and outside of government, DARPA has repeatedly delivered on that mission, transforming revolutionary concepts and even seeming impossibilities into practical capabilities. The ultimate results have included not only game-changing military capabilities such as precision weapons and stealth technology, but also such icons of modern civilian society such as the Internet, automated voice recognition and language translation, and Global Positioning System receivers small enough to embed in myriad consumer devices."[1]